Debra and the Horses

Debra and the Horses by Amethyst Freibott

Debra and the Horses combines a succinct tale of the wistfulness of lonely childhood with a grotesque and fantastic twist ending. Author Amethyst Freibott’s writing is compelling in its mixture of lifelike prose, irony, and subtle humor. Throughout, Freibott develops her character Debra with a fascinating mixture of innocence and mystery, the end resulting in depth that demands attention.

As a kindergartener at Hubert Hughes Academy for High Ability Children, Debra, from the Latin de-BOR-uh, established her reputation as the resident freak of the educational system. It began at recess where she found a dead bird with its beak stuck inside a used condom — poor little fucker had suffocated himself in the fall-out of a kinky high school romance that climaxed on the corrugated elementary school jungle gym — at which point Debra, or as she would say, “Debruuuhhhh,” because she was always too angsty for her own good — proceeded to gather it for her collection. She had always been fascinated by birds. She must have found it weeks after its fatal breath in the confines of the latex prison, at which point it made its final flight to birdie heaven and into the curious hands of the high-ability child, bare hands, mind you — bare hands! Oh, the humanity! — and eventually into the classroom of her teacher, Mr. Teffteller.

“Isthn’t it beautiful,” she asked with a slight lisp because she was missing her two front teeth after an unfortunate accident with the swing set earlier in the fall. “Juth the moth beautiful little birdie,” she crooned.

She gathered up the carcass against her chest and squeezed like a dysfunctional Build-A-Bear. “I with I could fly too, misther Teffteller.”

And then, Debra Anne Schumaker, newly established psychopath of the kindergarten class, pinched the tips of the crumbling wings between her small fingers and lifted the bird — a crow, with black feathers faded from the sun and rusting with blood, whose intestines (or at least what was left of them) oozed out of a hole in its stomach where it had been scavenged by its brothers — and took a running leap toward the door. She bounced around the room flapping its wings reciting the word “fly” over and over like the crow was fucking Lazarus. She was so intent on flapping its wings that she failed to notice when one of its eyes popped out of its skull and lodged itself between the sole of Evan Lewiston’s sandals and his foot like a dried up raisin. Evan cried.

If you ask them today, the other pitiful creatures in class that day will tell you that her eyes rolled back into her head until only the whites showed and she chanted some freaky shit about bringing the bird back to life, like she was possessed. But that’s just gossip. What really happened was this:

Debra ran around the classroom dusting her peers’ heads with flaking bird carcass, jumping over furniture, and finally slipped past Mr. Teffteller — poor 25-year-old kid in a button down shirt three sizes too big — and ran straight out the classroom door where she chanted “fly, fly, fly” while running around the elementary concourse and eventually lobbing the bird into the air. At that point what was left of the bird hit the pavement with such force that the janitor couldn’t even melt it off with Coca-Cola.

After crow-gate, Debra was — how did they say it? — “Gently encouraged to seek education at a less formalized institution.” She earned her place in the High Ability hall of fame and moved from gifted child to resident freak of the public school system.

By high school, her teeth had grown in crooked and she had to shimmy her clothes over her head gear every morning before class. She always wore the same thing: a pair of jeans two sizes too big and a pastel pink tee-shirt with horses printed on the front. She had five of the same shirt.

Unfortunately, while the years had been unkind to her dental situation, they had been equally unkind to her reputation. Her classmates, no matter how far she moved from Hubert Hughes Academy, remembered her five-year-old psychosis and often failed to introduce themselves to her altogether. She was as isolated in the 12th grade as she had been after “the incident.”

At school she was as high achieving as she had been when she passed the third grade exams in kindergarten, but because of her strange quirks her teachers barely believed she was destined for greatness, and so Debra, with her lisp absolved and interests matured, set her sights on a brand new target: horses.

One day she came home from school, her fingers stained black with dirt, and when her mother asked her what she had done that day she responded with a simple: “I like horses.” An hour later, their neighbors, the ones that lived behind them with the horse ranch, were beating the door down. When Debra’s mother finally met them outside, they asked her if she could keep her certainly psychotic daughter out of the horse stables because their horses had been in a panic since she left. But when Debra’s mother asked what they meant they could hardly speak.

Debra told her mother that she just wanted the horses to be free. She wanted them to fly too. Just like the crow that she rescued from its desolate grave on the playground so many years prior.

Two weeks after the neighbors’ visit, the janitor found Debra in the fenced-in playground of Hubert Hughes Academy, just behind the corrugated playset in the middle of the sand pit. She was propped on the plastic swing set drawing pictures with her toes. She drew the crow and Evan Lewiston’s sandal — if it wasn’t for that blasted eyeball stuck in Evan Lewiston’s sandal she could have gotten away with it — into the sand beneath her. She was always drawing that moment; she thought about that day a lot. Especially when she was sneaking into her neighbors’ yard to run her fingers through the grimy hair on the horses, recalling the feeling of the bird falling to chalk in her fingertips.

Weeks ago she had begun the process of rescuing the horses from their prison. Sparing them the way that she spared the crow, in a way that nobody understood — a little bleach in their trough every day, a little human decency to save them from the abuse of their neurotic owners. She was giving them their freedom back.

She got the idea weeks before when she walked past her alma mater and saw one of her neighbors’ old horses in the ravine behind the playground. She didn’t know when the horse got there, only that its stomach was bloated from its continuous decay. Its neck was kinked so its face pointed toward her, caving in from scavenging birds — probably crows.

And finally, on this day, two weeks after she had begun, sat atop her old swing set, the same one that knocked her teeth out in kindergarten and trapped her in the cycle of perpetual shame, she imagined that she was on a hot air balloon. She imagined the chains she held in her hands were the ropes that steered the beast as it flew through the air. Free.

She had always wanted to free things because she had always been caged. No one understood why she did the things she did, but at her core, she knew that decay was the greatest form of freedom she could offer.

Debra kicked her legs behind her, thrusting with all her might and without snagging her headgear on the chains, and launched herself off the swing and into the air — finally flying — and recited to herself the same chant “fly, fly, fly” that she did on the day the world decided it didn’t want her. She had saved the crow from the greedy hands of children and rescued those horses from owners that didn’t want them, and now, in the arms of her imaginary hot air balloon, she could rescue herself with a quick jump off the swing at its apex, straight from the seat, over the fence, and into the unyielding rocky ravine where the horse would catch her. Of all the destinies the world had imagined for her, she had created her own, and it existed wholly in her mind where no one else could tamper with it.

“Fly,” she whispered to herself, and with one final push she flew over the fence, and into the ravine where she finally found her freedom. 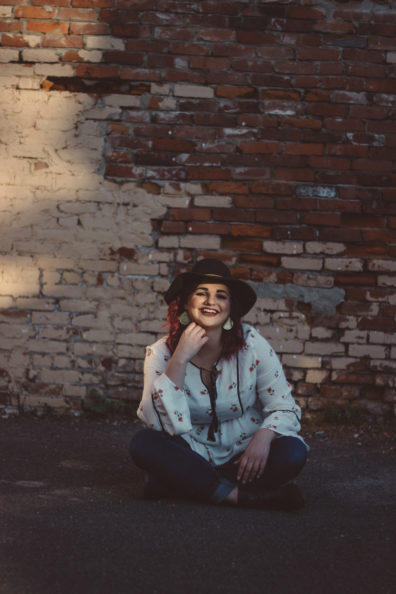 Amethyst Freibott spent her early years divided between the rural mountains of Arizona and the crowded suburbs of Los Angeles. You can most likely find Amethyst with a quad-shot Americano in hand, proselytizing her thesis on vulnerability and the human narrative to whoever is generous enough to lend an ear. She hopes to one day work in non-profit mobilization, but until then she’ll be tackling the literary world one off-color prompt at a time.