Janille Lowe has a beautiful talent for imagery and evoking emotion in her poetry. The poetry team was drawn in with her poem “Spirit” especially. Her words weaving with her activism gave life to a poem of a girl’s struggles with sexual abuse, tangling with the raw emotion from the viewpoint of an observer. Lowe has a gift that will haunt the reader.

Janille dedicates every word, sentence, and piece she creates to the love of her life Audrey who passed away this past September. Her only prayer is that he is proud of her; he has given her a reason to fight and stay strong for others.

So I grew up with this girl, a tomboy down the street who used to play ball with the neighborhood guys. Wore baggy clothes and obscured gender lines, shy. With Freddy-Krueger-like knees, she was about as pretty as a black berried peach. Her value trapped between hairline and breed; call her werewolf—you’ve never seen one like her before. White-washed so harsh, she stood in the sun in the hopes of tanning her bones. Urbanizing her inner structure, altering vernacular—she was too proper. Her grin never seemed to die though, that Cheshire Cat expression never faded. She used to try real hard to make sure others smiled wide like Saturn rings, wide like a field, wide like her waistline, wide like the never-ending horizon. Sacrificing her own tongue and blood she let others skin her daily. Black Dahlia like remorse, she was Hannibal Lecter’s favorite midnight meal . . . yet she only ever spoke of positivity. Running through her veins were revolution and meaning. She had X-ray-like eyes that could see through cruel intentions. She wanted to save the world . . . a neediness blanketed her grand statements and even grander body language. One time I caught her—no one was looking except me—and for the first time I saw . . . a stoic expression. No acting, skin peeled away dead-pan. Her crying for help—a screech—she became a peacock on fire flapping in front of me so slowly and so viciously until her colors melted off and there she stood, like porcelain. Melted plastic from a mold that she never could fit cause her hips were too big, skin too frail, body too reluctant. She stood there cold and unfazed. Rigor mortis had set in, inviting hands like chisels that kept touching and touching and touching even though she had a tattoo of the word “NO” on her chest, because this wasn’t the first time. Those hands kept going over and over until there was only a crystallized version of her. She now mimicked the living dead. She waned from the wind like a lynched body. A spectacle, she didn’t belong there. A rotted symbolism of what could have been. All eyes shifted to her and she lit up like the fourth of a foggy July. Hazy, she couldn’t fool me anymore. I rubbed my eyes and blinked three times and I could finally see that someone cut out her tongue . . . I could see the shackle on her neck . . . the stab wounds in her chest and the bullet hole in between her eyes. Call her Robert Kirkman, she revolutionized zombie. I realized that day all she wanted was someone to look at her and see that she was a graveyard, someone to notice that her skeletons weren’t in a closet but strung up like Christmas lights that she couldn’t fucking reach anymore. She was waiting and praying for anyone to tear them down for her. With her. Anybody to tell her that she was in fact alive and breathing and that even if she was dead it would, in fact, mean something. 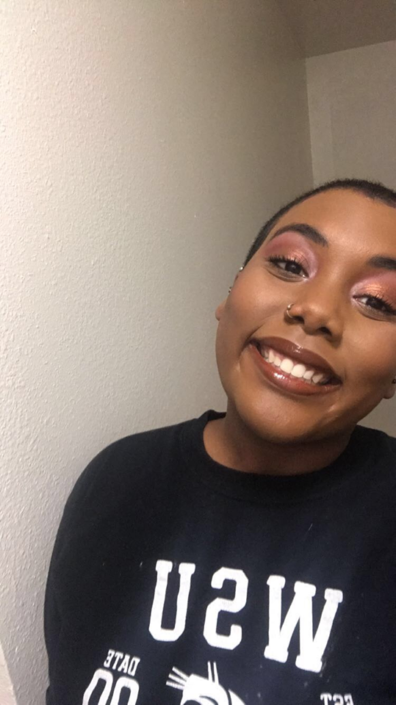 Janille Lowe is a first-generation college student in her fifth and final year at WSU; she will be receiving degrees in criminology and psychology and a minor in Asian studies. Her time here has been the most beautiful, destructive, and healing time of her young life. Her poetry is a literary reflection of her activism: militant, inclusionary, and vulnerable. She would like to thank all the friends who have twerked and laughed away the pain of life with her.